A Brief History of Butcher Block

What is Butcher Block?

Butcher block is a specialized cutting surface originally designed to be used in meat processing, with an especially thick, rugged design made to withstand constant contact with cleavers and carving knives. The defining feature of a butcher’s block is that it is an assembled wood product, made from strips of wood which are glued together to create a solid wedge. This allows manufacturers to pick out the strongest, straightest, most closely grained pieces of wood to create a butcher’s block which will last for decades, when well cared for. For over a century butchers and commercial chefs have used these specialized blocks. Over the last decade, with the rise of “foodie” culture, butcher block has also become a popular choice for upscale kitchen counters and island tops. Butcher blocks durability and rising social cachet has made it a heavy weight contender in the kitchen remodeling world.

How did it develop?

Butcher blocks origins go back to the last quarter of the 19th century. Two companies founded in the late 1870’s, in Michigan and Illinois, are largely responsible. Up to that point the most common cutting surface used by butchers was a section of sycamore log.  The boards’ size was limited by the size of the log. Often, a drying log would split, creating a sanitation problem.  Oddly enough, blacksmiths were also using blocks of sycamore as shock absorbing support for their anvils. Eventually these companies moved from sycamore to maple which is more easily available in the mid-west. Their early experiments with gluing strips of maple developed into what we now think of as butcher block tables, counters and cutting boards as well. 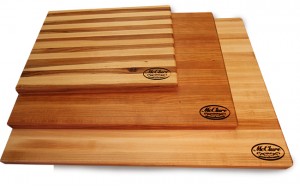 Today, butcher block surfaces are made with a variety of woods. At McClure Block we lean towards traditional hardwood maple, cherry, walnut and hickory, although other choices are available upon request.  We find these woods to be the most durable as well as the most decorative.  We will be taking an in depth look at each of these distinctive woods over the next few weeks.