Moving Up From the Ground: A Brief History of Furniture

A Brief History of Furniture (part 1)

Furniture.  It’s your stuff, it’s the stuff you stuff your stuff into, and it’s the stuff you sit on while you look at your stuff.  And the way in which furniture has changed and evolved over time, from a bed of damp leaves to the lab tables aboard the International Space Station, reflects the growth and evolution of human technology and human artistry and just maybe humanity itself.  Come tip toe through the time tunnel with me for a brief history of furniture.

The problem with accurately tracking the history of furniture is that furniture itself is usually not permanent.  Made mostly of wood, fibers and fabrics, it struggles to stand up to the forces of millennia, mostly in vain. We know more about ancient furniture from carved and painted depictions and written description than from actual physical evidence.

Long, long before the  Venus de Milo  was carved (101 B.C.) there were other “Venus’”. A LOT of other Venus’,  with some of the oldest going back to 35,000 B.C. or earlier.   These Venus were carved of stone, bone or ivory and depicted a female form with exaggerated female characteristics.   They were mostly small enough to carry. One of these, the ‘Venus of Gagarino’ (from a dig in Russia), is sitting on a chair. This statuette, carved  an estimated 23,000 years ago, is the first known artists depiction of man-made (as opposed to ‘found’ furniture). 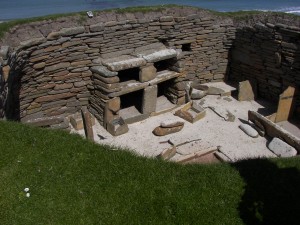 Actual physical proof of furniture comes from a Scottish archeological dig, called Skara Brae,  carbon-dated from approximately 3000 B.C. This dig recovered an 8 house community.  Some of these houses contain what appear to be stone bureaus or cabinets with shelves or cubby holes.  Perhaps part of the worlds’ first bedroom set.

The Old Testament makes it clear that wood working skills were known of as early as Noah (approximately   2450 B.C.).  The instructions given for the building of the Tabernacle, around 1500 B.C., make it clear that a variety of furniture related crafts, such as carpentry and weaving, had been developed.  Descriptions of items in King Solomon’s  house (bed, table, candlestick) make it clear that by this period (900 – 850 B.C.) furniture was created.

Egyptians in CHAIRS facing each other. A stele from the Nimrud Ivories, 7th to 9th century B.C.

Beds, boxes, chairs and stools constitute the furniture these cultures produced.  Again, we know this mostly from carvings but a good deal of furniture has been recovered from the tombs of the pharaohs and enough from archeological digs to see the disparate lifestyles of the royals and commoners.  Thrones gilded and decorated with silver, ivory and ebony for the former and unadorned wood for the latter.

The largest difference between Mesopotamian furniture and Ancient Egyptian seems to be the level of refinement.  The Egyptian pieces are, overall, less bulky and tend towards more rounded edges and more decoration.  There were, however, three Mesopotamian innovations that persist to this day.  For starters, they carved and decorated the legs of their furniture.  They also used fringes to hide seams and frames in chairs and beds. Lastly, they invented the idea of a ‘set’, as in living-room set or dining room set.  A set would consist of couches for reclining, a table for each couch and a chair for an entertainer or a servant. How else could one properly entertain? 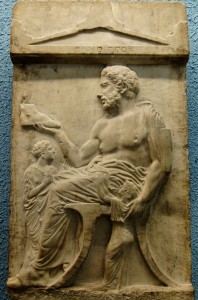 A stele depicting a man seated in a klismos

Like wealth, power, knowledge and the Sun, the development of furniture moved from East to West.  Ancient Greek furniture was constructed of metal and various woods and often fabrics. We know from historical writings that the wood included maple, oak and others but little has survived times onslaught fully intact. Still, enough clues remain to paint a picture of ancient Greek furnishings.

Joints were formed via mortise and tendon with glue, nails, pegs and lashings for support. Wood was shaped by carving, steaming, and with the lathe.  Ivory, gold, tortoise shell and glass are the favored decorations.

Theoretically, there were thrones for gods and rulers, depicted in statues and carvings. No actual thrones have survived from this period.   Klismos, ( chairs, with curved legs and backs) also date back to this period and region.  The originals seem to have been unstable in some fashion, as there are almost none existent from the Greek period but they were revived in later periods.  Also, the Kline, a type of couch, was very popular.  In the Egyptian fashion, each kline would have a matching table sized to fit underneath that could be pulled out for dining. These were the worlds’ first T.V. trays. 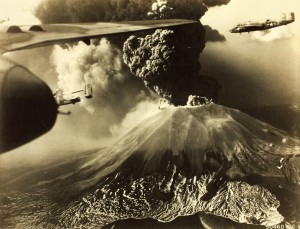 ‘…this is why we can’t have nice things.’Kidding aside, the erruption of Mt. Vesuvius in 79A.D. killed two heavily populated cities but preserved much of the art and furnishings. Pictured is Vesuvius erupting in 1944. 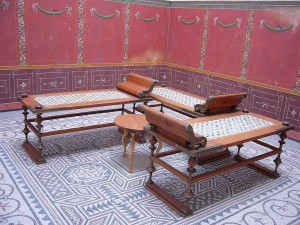 Roman couch and table set, in the Greek style

Ancient Rome (500 B.C. to gradual disintegration in the 6 century )

Roman furniture was mostly the same as Greek furniture, but with Roman names.  What the Romans added were stools, benches (loooong stools), and folding furniture for easy transport.  The also invented the cathedra,  a high backed wicker chair, for women.  The Roman habit of mimicking the Greeks extends to the longevity of their furniture as well. As with Ancient Greece, time, weather, war and natural disasters have destroyed most of the evidence of furniture, and really most everything else.   (end of part 1 )