The Medieval period begins with the collapse of the Roman Empire and to a certain degree, all of civilization. This is reflected in a utilitarian look to the furniture for those first few hundred years. The populace was too busy trying to scratch out a living, in a manner of speaking, to have time for scratching ornamentation into their furniture. We see mostly chairs, tables, chests and stools from this period are generally rough-hewn from oak. 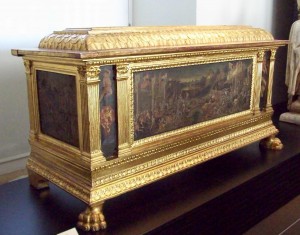 As we move into the Italian Renaissance period, starting in the 14th century, we start seeing fresh accumulations of wealth and a return to the search for the finer things in life. This is the time period in which artists and architects  start signing their work. The furniture of this era is wonderfully ornate. We start to see a proliferation of regional styles as well as continent sweeping trends. 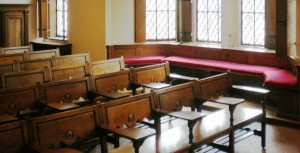 One of these trends was portable furniture. Building on the ideas of the Roman generals, noblemen of the era with more than one dwelling would have a single set of portable furniture that would move with them as season or necessity indicated. Desks and boxes with compartments were now added to the usual assortment of chairs, tables and stools. Decorative engraving moved up from the legs onto the backs and arms of chairs.

There were more than a few regional styles of note at this time. One was the Jacobean era (567 – 1625 A.D.) coinciding with the reign of King James I of  England (who was also King James the IV of Scotland).  The carves we deep and plentiful in this style, with lots of swirls and mother of pearl ornamentation.  Scrolling woodwork and ocean motifs were plentiful as well. 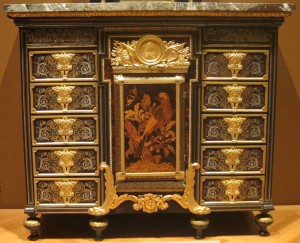 A commode from the Court of Louis XIV. No, it’s not what I was expecting either.

Louis XII loved Italy and Italian art and culture. He loved it so much, in fact that he spent 5 years trying to conquer and hold it.  When he finally gave up and went home he decided he still couldn’t live without the art and the furniture. This is how the French Renaissance started. From one Louis (remember to use your fake French accent)  to the next, French royalty became obsessed with high style. Louis XIII period furniture had heavily turned legs, arms for their arm chairs and upholstered stools. Louis the XIV went mad for intricate carvings of mythological entities.  So mad, in fact, that in 1663 he hired a Supervisor of Royal Furniture for his Palace of Versailles, the first interior decorator. This Louis like his decorations busy and balanced. Everything was carved, gilded, inlaid, painted, padded and pedestaled. His motto might as well have been “If it isn’t Baroque, FIX IT!”. At least until too many losing wars forced him to melt down his solid silver dining room set (yes, really!!!) and reassess his decorating budget.

Louis the XV moved away from the heaviness of the Baroque style towards more Rococo influenced pieces. Brighter colors and asymmetrical designs abound. 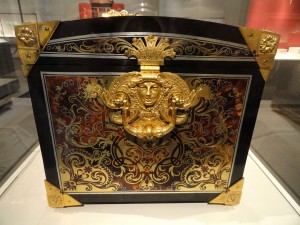 Carving was out. Veneer and inlay was IN and Andre Charles Boulle was the undisputed master of this style. By the time of his death in 1732 this style had become known as Boulle or in Britain, Buhl.

With the reign of Louis XVI Rococo was out and neo-classicism was in. Smaller, lighter pieces became popular as did pastel colors, exotic woods and decorative touces that referenced Greek and Roman styles of the classical age. It wasn’t a particular designer or the designers guild behind this change but the “marchands-merciers”,  a group of art and furniture dealers to the very wealthy. As a historical side note, this was also the period in which the price of a loaf of bread and a typical days wages for workers became roughly equal. Near the end of this period, the use of the guillotine became very popular.

The furniture made in the Jamestown and Plymouth colonies in the 17th century started as rudimentary versions of the Jacobean furniture they had left behind. Items were, generally speaking, oak, rectangular, low to the ground, chunky, and decorated with carvings and paint. As travel distance created a time lag in learning of the latest European fashions, American furniture gradually developed it’s own original style with it’s own distinctive pieces. One of these was the Hartford Chests made by Nicholas Disbrowe. Disbrowe (as and his later imitators) used split balusters on the stiles instead of relief carvings, and decorated his distinctive oak and pine chests with bosses, paint, and carved flowers and foliage. There were also Hadley Chests, so named for the Hadley Massachusetts, the town they seem to have originated in. These chests feature one or more drawers, rough relief carvings of tulips and vines, paint of various colors and the initials of the person for whom they were made. There are over 100 existing examples of these leading us to think the were rather popular. The Guilford Chest was also popular. This was usually a single panel front with a single drawer, brightly painted, often with a bird on the side panel. Settles, a combination of storage chest, bench and couch, were very popular. Their high backs made with interlocking slats made them a good choice to pull up to a fireplace. The design of the piece trapped heat and blocked drafts. Very useful in a log cabin with no central heating. Finally, the Brewster Chair, a piece that depends heavily on turning, was named after one of the Pilgrim Fathers.