What’s big and hairy and lives wild in the mountains of Tennessee?  The shagbark hickory tree, that’s what.

To be fair, carya ovata, a/k/a the shagbark hickory, grows throughout  the Eastern United States and Canada but almost nowhere else. They get big, over 100 feet, but the tallest ever measured was in Tennessee. It was over 150 feet tall. 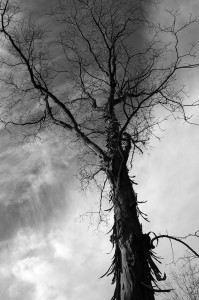 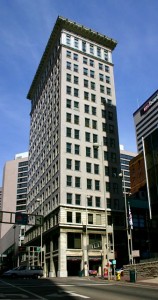 The Ingalls Building in Chicago, for comparison

This Stuff is as Hard as a Rock

Hickory wood is stiff and wears like iron. It is used for anything that needs to withstand heavy physical contact. Drum sticks and walking sticks are made of hickory. So are tool handles, butcher block, cutting boards  and ladder rungs. The Ojibwe used it for their bows. Hillerich and Bradsby made the famous “Louisville Slugger” baseball bat our of hickory. 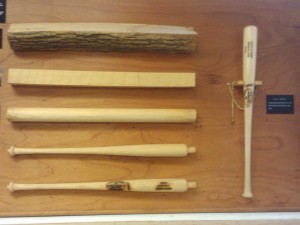 Made by Hillerich & Bradsby; Used by Ruth and Aaron

Also, you can eat it. I don’t mean in an ‘if-civilization-is destroyed-and-we-gottta-eat-something’ kinda way. I mean, if you like pecans and hazelnuts, you might like shagbark hickory nuts. Lots of people love them. Squirrels, too. They are not usually grown commercially for the nuts because output tends to be unpredictable. Still, the nuts are available commercially and are considered a delicacy by many. There are also various flavoring compounds available that are extracted from the shagbark bark.

Shagbark Hickory trees not only grow tall, but wide (six to seven feet in diameter, on average) and fast. They are considered excellent shade trees because of this. They also grow a long taproot and are considered to be the best choice  to plant in hurricane locations, since they appear invulnerable to wind damage.